Tracing its history back to the establishment of monastic Buddhism in the Himalayas in the 8th century, Lo Gekhar (also known locally by the name “Ghar Gönpa”) is one of the most significant sites of cultural and religious heritage in Mustang District. It is a major structural complex including numerous chörten spread on a fertile slope with several natural springs. The monastery is a pilgrimage site that now can be reached by two rudimentary roads leading into its vicinity. It also lies on a trekking path leading across high altitude pastures from Drakmar to Lo Manthang, now paralleled by a road. 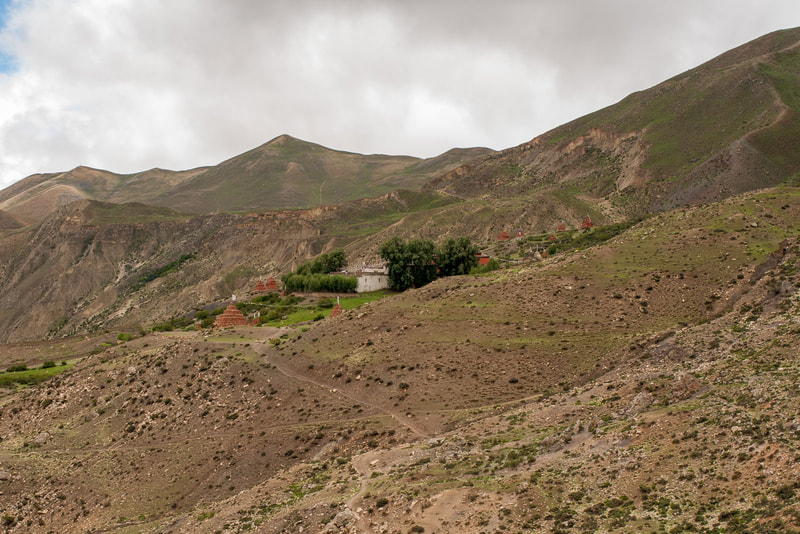 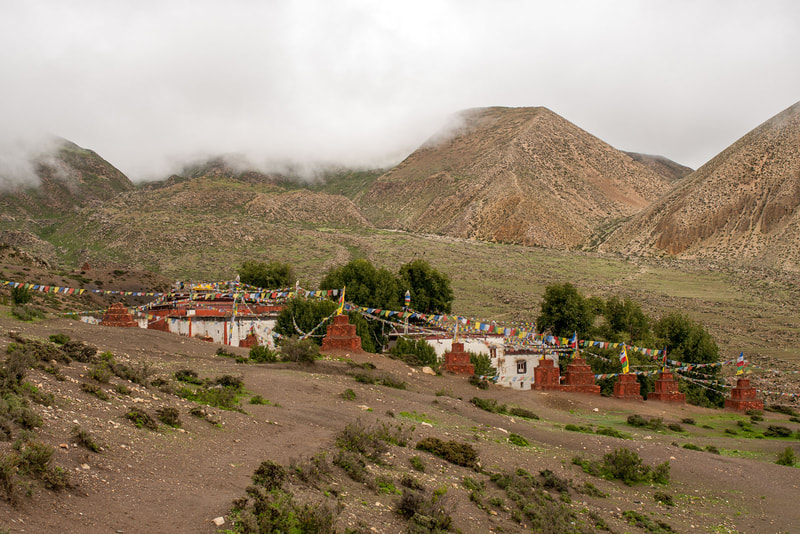 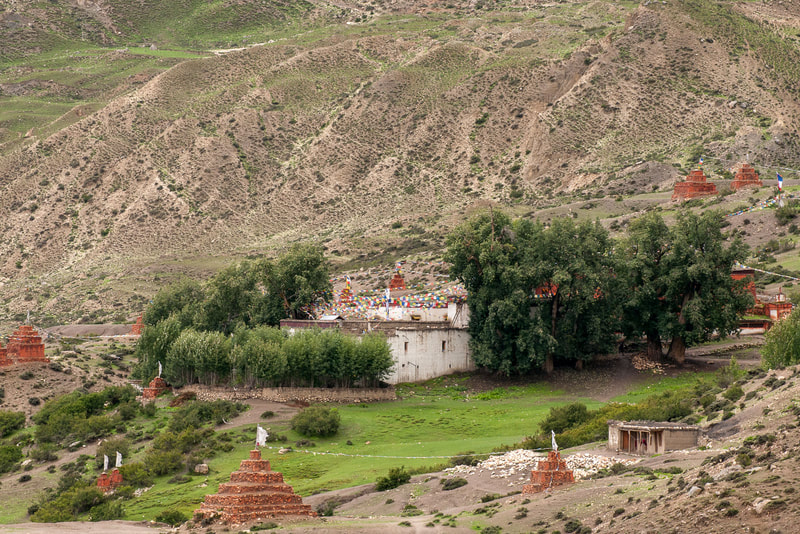 The temple of Lo Gekhar is located at an altitude of 3930 meters on the south bank of the Marang River, a tributary to the Kali Gandaki, in Upper Mustang. It sits at the head of the valley that houses the villages of Marang and Tsarang, the latter being one of the largest villages in the valley and a key settlement in the history of the historical Kingdom of Lo. The complex is owned and maintained by the village of Marang. The exact location of Lo Gekhar is 29°07'28.7"N 83°53'19.7"E.

The temple of Lo Gekhar is considered the oldest Buddhist temple of Mustang and contemporaneous with the first monastery of Tibet, Samyé, which was founded in the late 8th century. Its foundation is recorded in the Pema Katang (pad+ma bka’ thang), a text containing the biography of Padmasambhava, the teacher credited with taming of local deities across the Himalayas. This text was discovered by the treasure revealer Orgyen Lingpa (o rgyan gling pa; b. 1323), his date thus providing a terminus ante quem for the original temple. The relevant account is found in canto 62, recording the completion of Samyé Monastery, and is translated as follows (with explanatory additions in square brackets):

“At Lobo [= Mustang], the place which is as if a rakṣasī [a demoness] were lying on her back,
place on her heart a monastery with nine floors,
a stupa on her navel,
another small and black one on her head,
and one hundred and eight on her four limbs!
In Malgro is the naga king called Shines in Malgro [= mal gro gzi can].
He has great influence in Tibet;
I will establish for him a naga treasure; I want his life philtre [= srog chu - life water]."
And the Guru came along into Malgro.
Keeping his promise, shaking the depths, giving solid explanations,
and having given treasure and a place of worship for the nagas, he
received the life philtre.
However, no oath bound the mind of the nagas, so to keep them
silent,
he erected at Lobo the monastery of White Virtue [= dge dkar, Gekar].”

​Ye shes mtsho rgyal. The Life and Liberation of Padmasambhava (Padma Bka’i Thang). Translated by Kenneth Douglas, Gwendolyn Bays, and Tarthang Tulku. Berkeley: Dharma Publishing, 1978, p. 385.​
​Accordingly, Lo Gekhar is this monastery of White Virtue, and the surrounding chörten and springs are part of the holy site. This account also explains why Lo Gekhar is of great cultural and religious importance to the Mustang region and to Tibetan Buddhism at large. The temple is frequently visited by pilgrims from the region and beyond. The complex is also used by villagers from Marang and Tsarang for special rituals.
Of course, the original age of the monument cannot be proven without an archeological excavation. However, the main sanctum of the monument with its exceptionally thick walls and unusual interior is undoubtedly ancient, and the complex is distinct in location, architectural heritage, artistic heritage and size. The monument as it stands today predominantly dates from the last decades of the 16th century onwards, a restoration of the complex being recorded at that time.

Architecturally, there are three distinct structures to the complex, the actual temple (lha khang or gtsug lag khang), the religious mansion directly adjacent to and integral part of it (pho brang), and a U-shaped complex along the central axis of the temple. In the following these are described in some detail noting their present condition.
The temple has four distinct structural units, a two storied sanctum housing the main images, the Guru Lhakhang (gu ru lha khang), an assembly hall in front of it, a protector’s chapel to the right of the assembly hall, a gönkhang (dgon khang), and a roofed entry area. Of these, the core structure is massive and may well have once been the base of a tower as narrated in the Pema Katang. 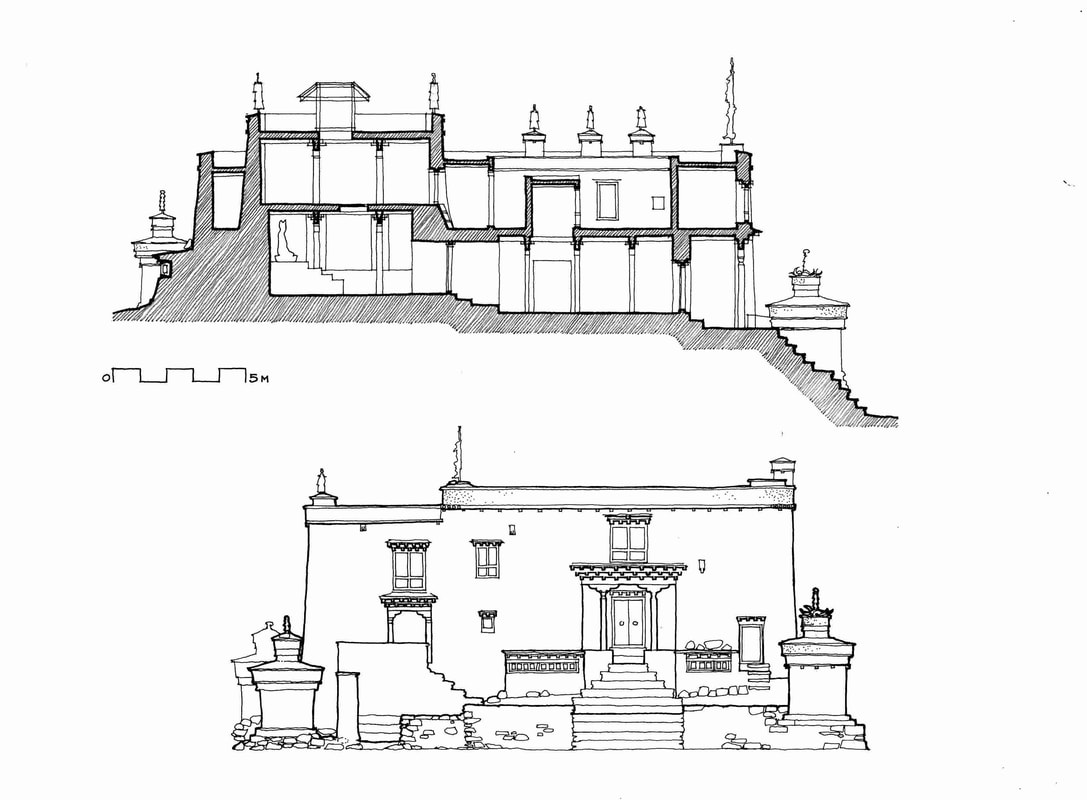 Section through the Main Temple with sanctum and assembly hall as well as frontal view by John Harrison.

The temple’s sanctum houses an image of Padmasambhava flanked by two consorts as its main image. This central triad and other images flanking them are today separated from the rest of the room by an altar screen. It further contains a cherished gilt Buddha and many images of papier mâché, including a high quality set of the eight manifestations of Padmasambhava. The oldest image in the room is a stone image of Avalokiteśvara embedded in the right wall of the sanctum.
The structure in front of the sanctum has been built at a later stage and is not directly in the axis of the temple's core. In part this is due to the protector’s chapel along its right side. This room has modern murals, but most of its walls are covered by stone relief panels in wooden frames dedicated to different themes, among them the eighty-four Mahāsiddhas, diverse groups of Buddhas, the twenty-one manifestations of Tārā, and repeated depictions of Vajrasattva. While they have been repainted recently, the reliefs are considerably older. 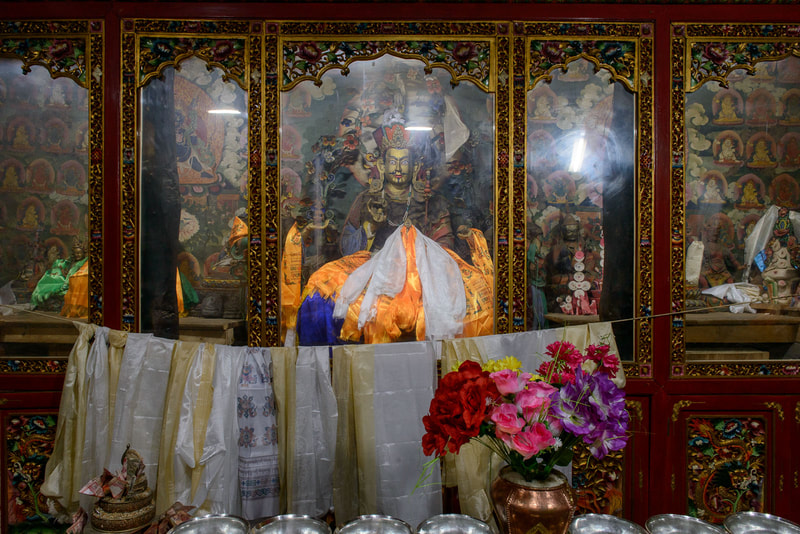 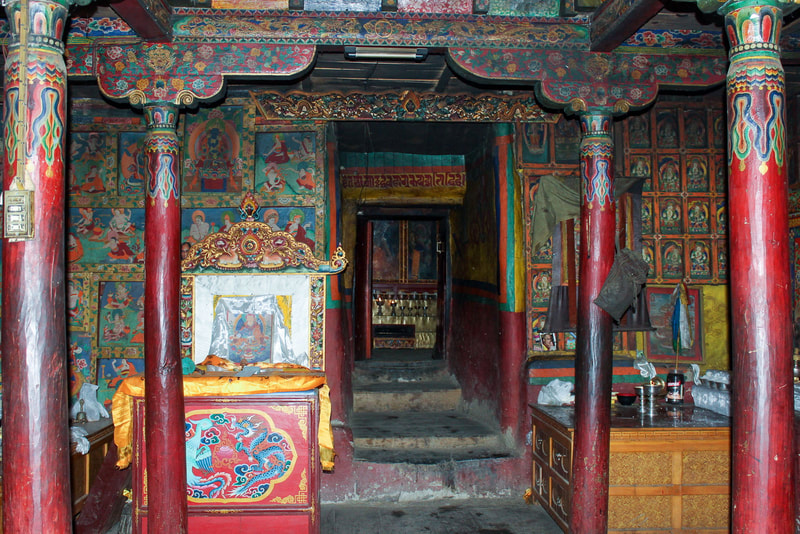 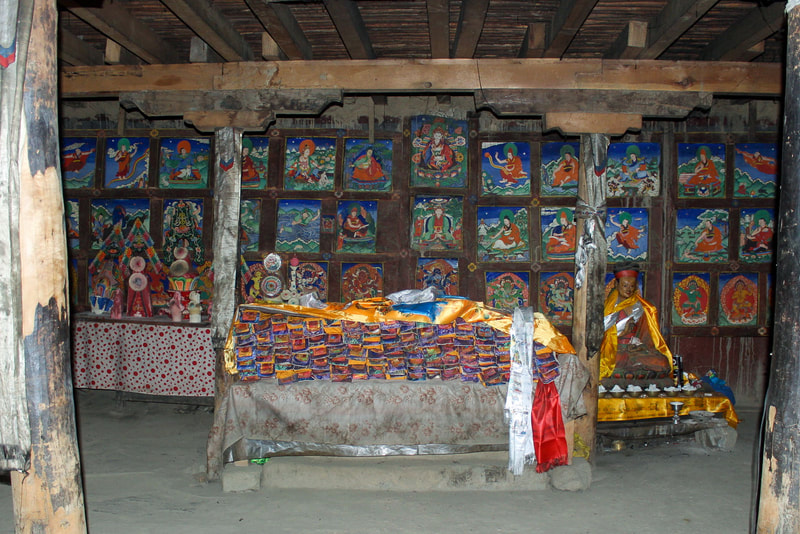 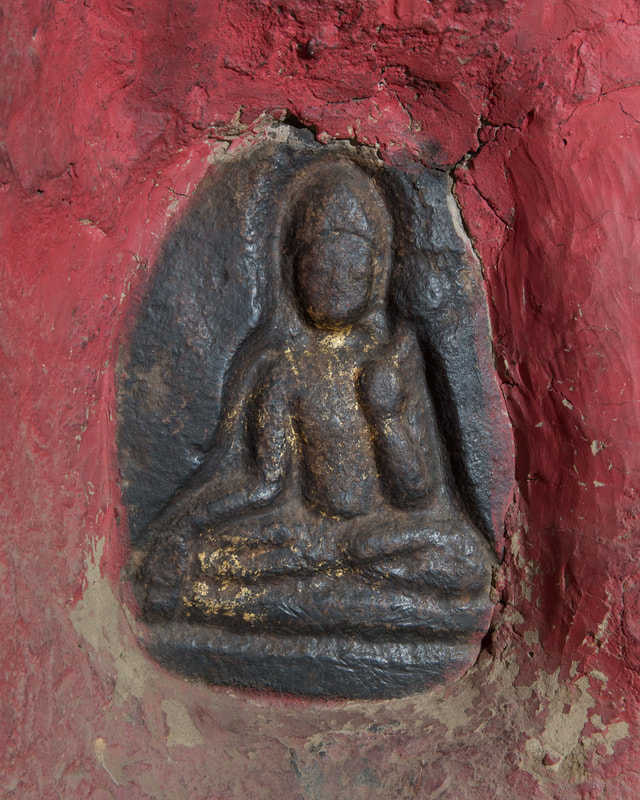 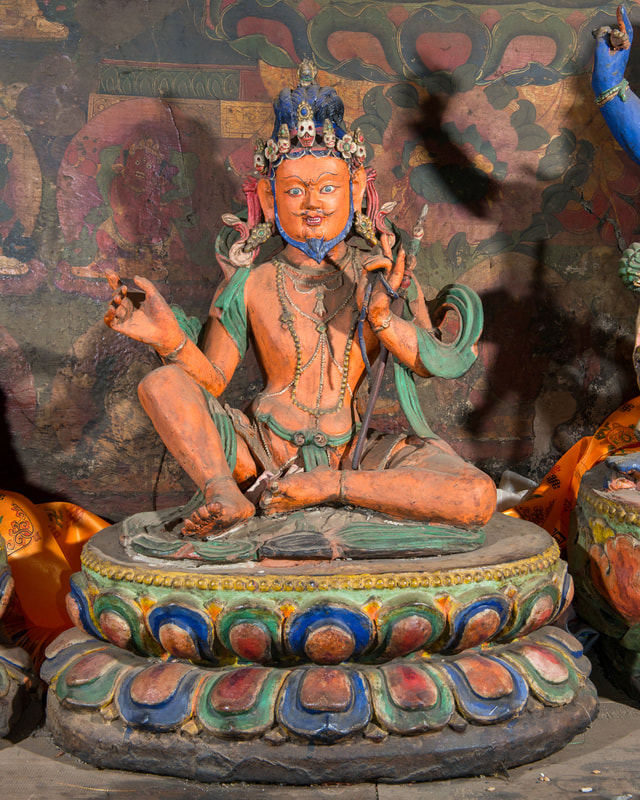 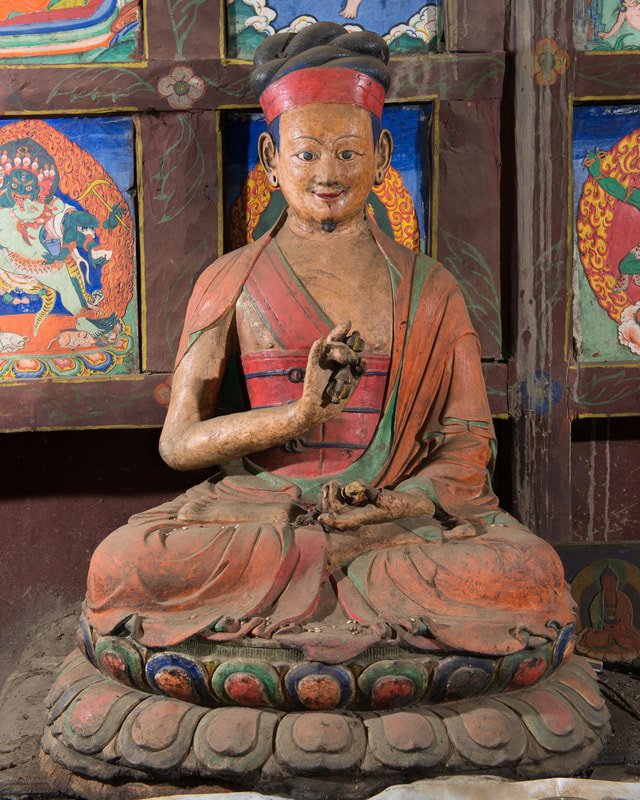 The upper sanctum, too, is decorated with stone panels only. Along the main wall the panels depict Padmasambhava and his 25 disciples, while the side walls are dedicated to the 108 peaceful and wrathful deities of the intermediate stage (bardo). There are two further rooms decorated with stone panels, one containing numerous inscribed panels with the Bodhisattva Avalokiteśvara, and one containing the group of the sixteen arhats.